My world has changed again. We're a whole new "Brand New 'We.'" This is my squirmy, pink, chubby-cheeked daughter.

There's so much in flux right now...I'm not going to try to perfectly capture how I feel. I'm just going to say that I do feel. I feel constantly. Big feels. This is my daughter. My second child.

When did I become enough of an adult to have children? How did that happen? And why does my recessive blonde gene seem to always win the fight in the DNA pool? Not that I'm complaining, I love Babyhig's hair, and her hair...but I really thought we'd have some brunette babies. Maybe I wasn't paying as much attention as I thought in sophomore biology...

Labor and delivery was great. Really great, even. No one seems to believe me when I say that--there are always a lot of raised eyebrows and scrunched foreheads and sympathetic "Ohhh"s--but seriously...it was.

I was debating on whether I would write this here, because I don't want any cyber-raised eyebrows or scrunched foreheads, but my desire to remember outweighs my lack of desire to deal with any of that. It was a long process. I was induced, started on Pitocin, at around 10am. Most women's bodies do a little work during pregnancy to get ready for labor, but not mine! I'm special that way.I had to stay in bed all day because I had soaring blood pressure numbers. I was at 150/110 in the morning!! Terrible. So I was in bed, horizontal. That doesn't help things move along all that quickly in the world of labor. By seven pm that night, I had only progressed one centimeter. ONE! That was a bummer. So I talked things over with my doctor, and she broke my water. (It was okay, I wanted that to happen.) Having your water broken is so weird. I had low fluid with Babyhig, so when my water broke it didn't make much of a difference, but this time! Holy cow. My stomach deflated like a balloon. I actually weirded out a little bit, I was so fascinated by it. My nurse and doctor laughed at me. Oh my goodness! Bodies are amazing.

Anyway, after my water broke, enter the pain. You know what they say about forgetting how much labor hurts? That happens. This was tough. Lots of discomfort, a fair amount of crying. Pain. I had severe contractions 1-2 minutes apart for about an hour and a half, which is good, and I progressed...

So I called for an epidural.  We waited about another hour for the anesthesiologist to come, and then he was there and did his thing. (There was a lot more pain and "dealing" during that time. Dan is a good man.)

Let me just say, praise the Lord for epidurals. Praise the Lord. It was thorough and I was able to rest for about an hour before my doctor showed up again. I joked with her that she was going to tell me that I had progressed 4cm in the last hour. We all laughed. And then she checked me...

...and I had progressed 6 centimeters in the last hour! So I say again. Praise. The. Lord. I mean no, I don't get to say, "Oh and I didn't get an epidural!" to everyone that asks (because everyone asks, because that's apparently what really matters when you have a baby...), but other than that, praise the Lord for epidurals.

We were working up to this for nine months, and then in a major build up to it for the entire day on Friday...and yet I just couldn't believe it when I saw her. She was there. Seven pounds, 15 ounces, 19.5 inches long. It's indescribable. A whole person just started. Right then. And she started with me. She hardly cried, just stared around the room and blinked really really really slowly.

People say she looks like me. I have no gift for identifying the faces of parents in their children...even my own in my own, but I believe them. Plus, people are also saying she's pretty, so I can't fight that.

We're five days into this now, and she's even more perfect.  Having a new baby at home is just the weirdest and coolest and scariest and best thing.

And this is what we're doing now. This is hig2point0. 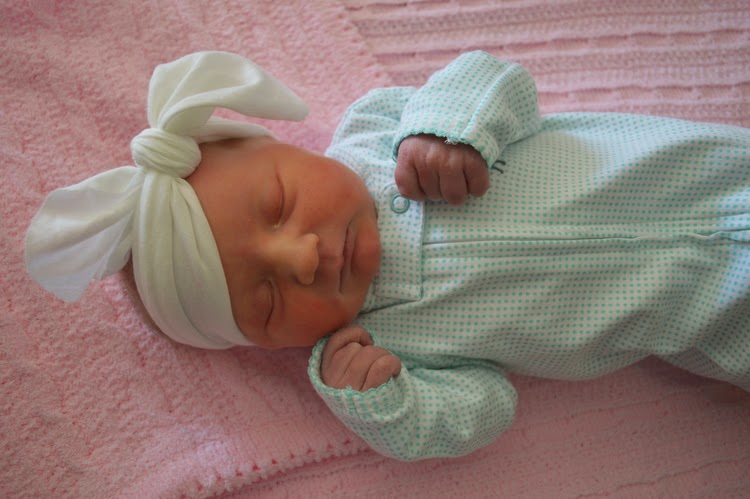 Posted by Jessica Marie at 1:49 PM